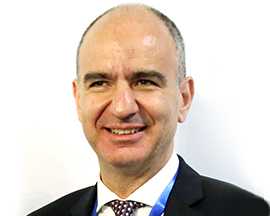 Habib Khalil Sayegh is CEO of Sayegh Companies, based in Lebanon with associated companies in more than 18 countries.
Habib Khalil Sayegh graduated from the University of Cambridge in the UK with a Master’s degree in Business Administration in 1994, a Master’s degree in Arts in 1990 and a Bachelor’s degree in Arts (Hons) in 1987.
At present, the Sayegh group employs over 650 highly-trained personnel. The cornerstone of Sayegh’s pride is its famous collection of over 700 dictionaries and encyclopaedias, published by Librairie du Liban, founded in 1944 by Habib’s father, the late Dr Khalil Sayegh, and his late brother Georges Sayegh. Other major achievements are the York Notes, the number one guide to English literature in the UK, the publication of the superb Ladybird series in Arabic, the Butterfly series, and the complete works of leading authors in Arabic literature, including Nobel Prize winner Naguib Mahfouz.
Since 1999, Sayegh’s contribution to the field of education has increased significantly with the establishment of the Educational Research Centre (ERC). The ERC participates in a number of projects with governments each year.
In the last five years the ERC has launched a number of ambitious Pan-Arab initiatives, the flagship programme of which is the International Arab Baccalaureate (IAB), and has invested heavily in the development of e-learning and e-assessment platforms and materials.
Sayegh is closely associated with the world’s leading education company, Pearson Education Limited. Sayegh and Pearson have established an enduring strategic relationship which began in 1945 between the founder Dr Khalil Sayegh and Longman & Green.