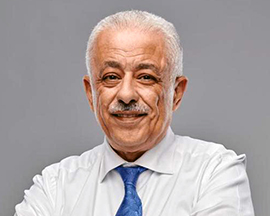 MINISTER OF EDUCATION AND TECHNICAL EDUCATION IN EGYPT

Educated at Cairo University in Egypt and Brown University in Rhode Island, USA, Dr Shawki spent 13 years as a researcher and professor of Theoretical and Applied Mechanics at the University of Illinois at Urbana-Champaign, one of the top engineering schools in the world. Dr Shawki has a PhD and an MSc in Engineering, an MSc in Applied Mathematics, and a BSc in Mechanical Engineering.

Prior to this current governmental post, Dr Shawki was the Dean of the School of Sciences and Engineering (SSE) at the American University in Cairo (AUC). This academic assignment started on 1st September 2012, following a four-year tenure as the Director of the UNESCO Regional Bureau for Science in Arab States [2008-2012] located in Cairo, Egypt. Prior to his UNESCO Cairo Office appointment in June 2008, he was the global Chief of the Section for "ICT in Education, Science and Culture" within the "Information Society Division" in UNESCO headquarters (Paris, France). Dr Shawki has served as the regional advisor for Communications and Information at the UNESCO Cairo Office (UCO) between January 1999 and November 2005. The UCO is a regional office for science, technology and information for Arab States. Dr Shawki has been a panelist on the National Science Foundation and the National Research Council.

Dr Shawki has pioneered the strategic public-private partnership with the IT corporate within UNESCO which includes Microsoft, Intel, Cisco and Apple, Inc. He has been the key architect of the standard setting effort by UNESCO involving the "ICT Competency Framework for Teachers" (ICT- CFT). Dr Shawki has been developing major programs involving the effective use of ICT in education, science and culture.

Dr Shawki is the founder of the so-called “Egyptian Knowledge Bank” (EKB) which is the largest knowledge digital library in the world containing digital resources from world-renowned publishers and it is made available and free for all Egyptians since its launch in January 2016. Furthermore, Dr Shawki has led a massive transformation in Egyptian pre-university education since 2017 and introduced the new Egyptian education system known as “EGY Edu 2.0” which covers different levels from KG1 to Grade 3, and aiming to cover all the remaining grades by 2029. Moreover, Dr Shawki introduced a major integration of ICT technologies in high-school education at a national scale, changed assessment models and learning resources, and used electronic examinations across the country, in addition to re-inventing the structure of the “exit examination” in Grade 12 in Egypt.